Turned the pedals for the final times as I made my way into the hectic frenetic crazy mad place called Busan. The markets are totally too much , too many people pushing , spices and foods of all sorts being traded and loud argumentative type conversations – it’s a vocal culture and I am reminded again that I really am a country type person . Will be a short stay in Busan.
I’ve heard that the cycle way project is something of a political hot potato and out of favour with the current powers to be. It has an interning history. It started as part of a massive river restoration project, the South Korean government has created bike paths that mostly follow four of the nation’s largest rivers, making it possible to travel from Incheon to Busan by bicycle.
Although met with plenty of political and environmental opposition, The Four Major Rivers Restoration Project, led by [former] president Lee Myung-bak, not only aims to improve water security, flood control, and ecosystem vitality, it also encourages more people to discover what the Republic of Korea is all about on the countryside of life.
In addition to biking from Incheon to Busan, you can also explore the Guem and Yeongsan rivers. Various other bike paths already exist throughout the country as well. And as biking continues to gain popularity, South Korea will likely become much more biker friendly.
The total distance from Incheon to Busan using bike trails is approximately 600 kilometers. If you choose to take this route, you’ll follow the Han and Nakdong rivers. The Seajae Bike Road connects the two river paths by cutting through challenging mountain terrain for some extra fun.
Don’t be deceived. Just because the bike paths follow rivers doesn’t mean it’s going to be flat and easy the entire way. In fact, it’s quite the opposite. There are many steep inclines, and swerving declines to survive. But, gorgeous valleys with breathtaking views will be your reward on the way up and down. I used navigation aids on the iPad and was always able to work out if I was still on the correct route. Had several occasions where I had to backtrack and get on the correct path again.

No English signage makes it challenging for non Korean cyclists. Interesting that in my 6 day ride a met only 7 other international cycle tourists. Not sure that Korea is pushing this amazing asset they have.

Towards the end of the ride — you can see this trail hugging the river at huge cost. Just incredible what the Koreans have done.

Even had a cyclist only bridge today — amazing 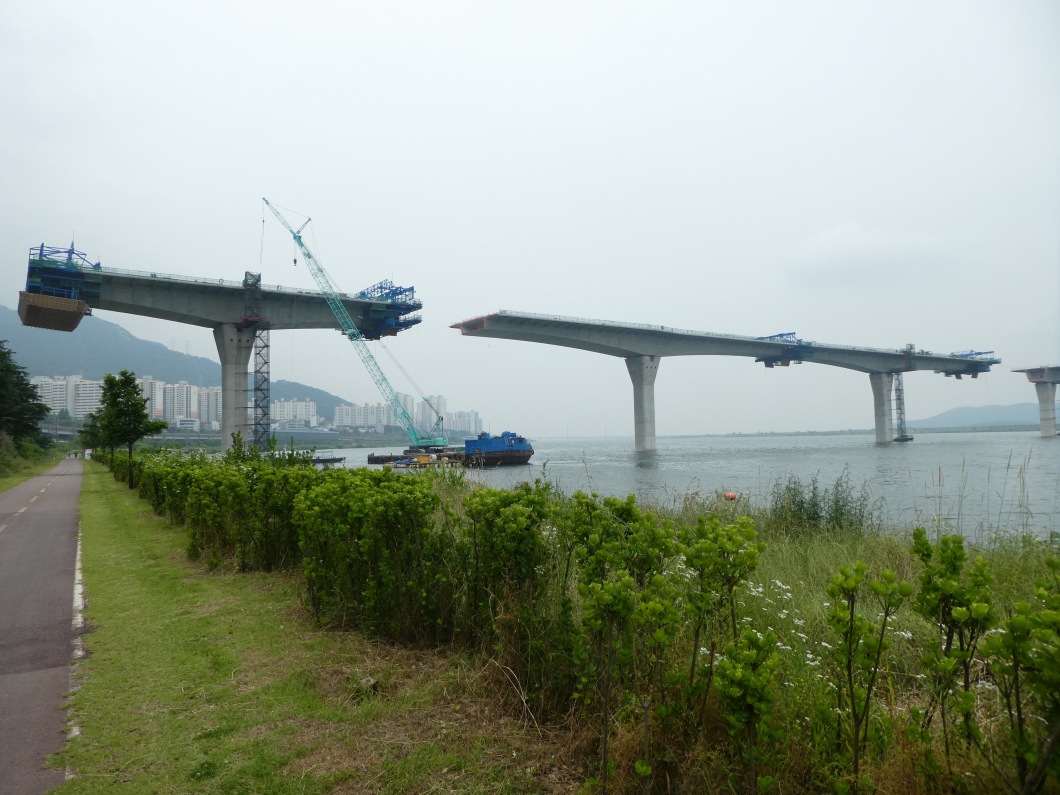