Was up in the wee hours getting everything packed and in its place and finally hit the road, lights blazing. Had every bit of warm clothing I had including gloves . The desert nights under these cloudless sky are starting to become super cold.

The track starts only 4 km outside Birdsville town , and it didn’t take long to appreciate the measure of the challenge ahead. Conditions vary from stony to sandy and constantly change . The southerly winds played a huge part in slowing me down and by day’s end I think my moving average was way down at 12 kms per hour. I finally pulled the plug sometime near 4:30 -5 and set up camp in a spot in the desert near sand dunes. I had just enough time to establish camp and to cook a meal before it was dark and cold again. 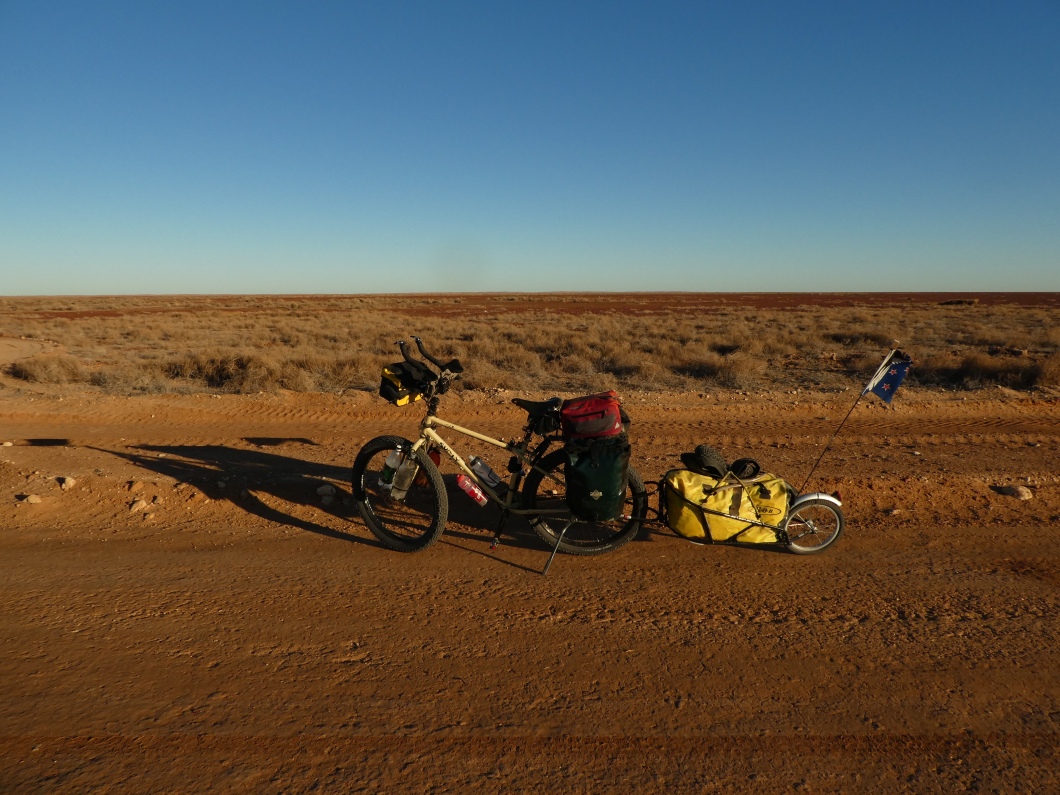 Was awake and organising / packing up by about 5:30am. Takes a while to methodically sort through everything and also cook up a great Keto breakfast. Three eggs , savoury sausage , half onion , olive oil omelette. Finding the Keto style of eating working just fine . I don’t notice any drop off in energy levels as the long riding day unfolds , and the hallmark lack of “feeling hungry “ is clearly the reality on very low carb style eating.

Was another chilly dawn and I was pleased to finally get back on the road and generating some heat . The cool conditions also stops the bothersome flys. Takes them till midday to show themselves , and they are truly awful for the balance of the day till dusk. 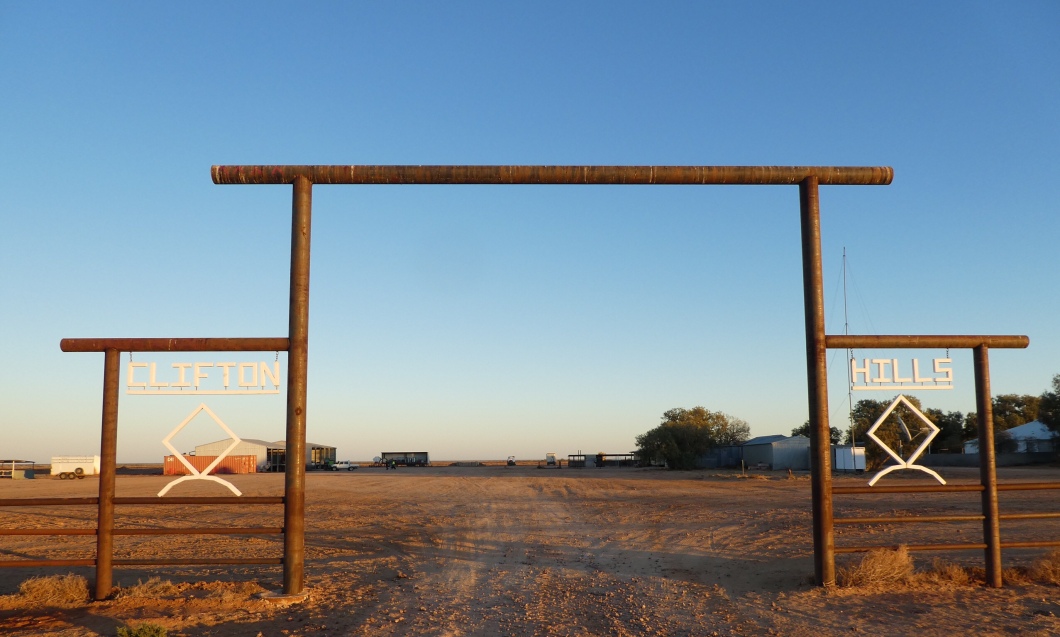 I had met the manager , Peter Nunn , of this huge beef station at the rodeo in Birdsville. Clifton Hills organic beef station covers an incredible 16,500 square kms. His stocking rate is just over 1 head per sq km !! Staggering. The homestead is about 200 kms from Birdsville , and Peter very kindly offered to carry my day 2 – 10 litre box of water, the plan was him to give me the water when he returned home after the rodeo which was going to be my day 2. As things turned out when he did eventually catch me I was only about 30 kms from the station. Peter offered station hospitality and in due course I peddled the 1 km off the track and was ushered towards the guest quarters. Comfortable quarters , a house to myself — ah a real bed and a shower too. These outback Aussies are good sorts.

Guest house – all mine

Day 3 was a particularly gruelling affair with the winds making each km of progress an exercise in fortitude and fatigue . I left the Clifton Hiils station a little late perhaps ( about 8:30 am ) and needed to make a spot called Mirra Mitta hot water bore.

The speed was low and the day not long enough as I kept on pushing along . With the sun starting to set I finally arrived at my stopping point and had just sufficient light to erect the tent. Had a nice cheery fire as I cooked my dinner. For companions I need a huge flock of boisterously bickering corellas that roosted all night in the nearby trees, and a howling dingo who visited sometime in the night and took my emptied can of stew . It was a primo camp spot, a perfect desert oasis with super hot bore water feeding this lake. Often the bore water in this area comes out very hot , here at 90 c . 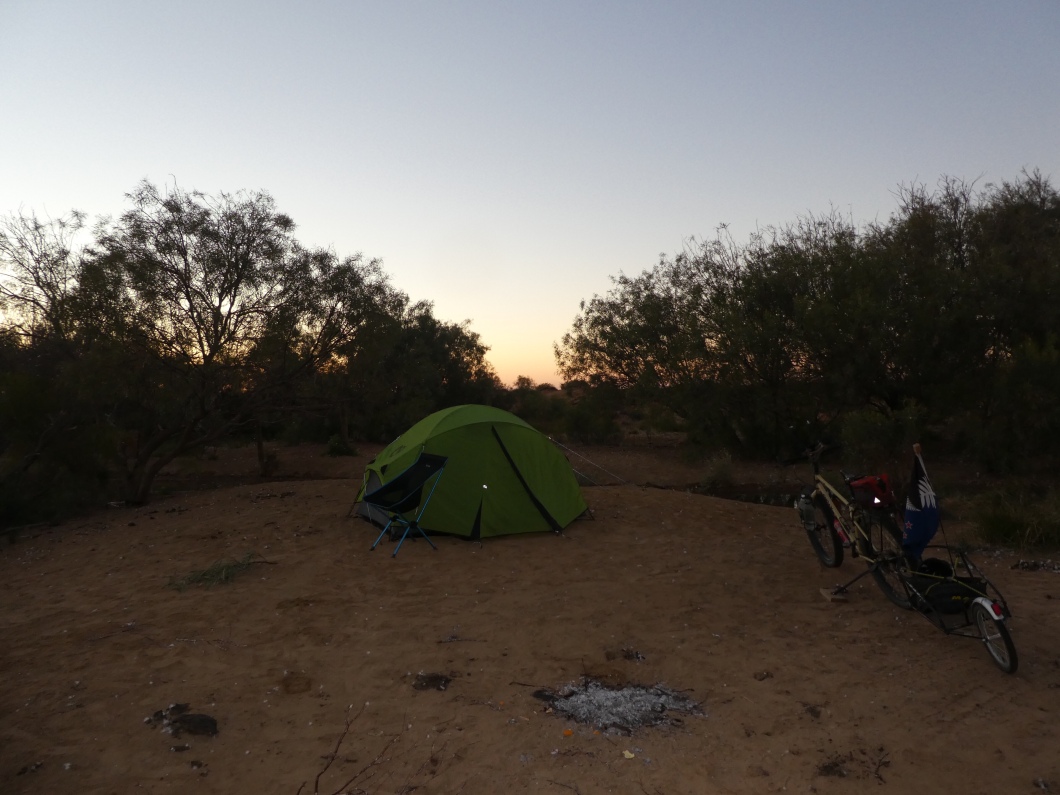 Day 4 – only 36 kms to a remarkable pub at Mungerannie and the promise of not only a short day , a room in the inn , and the following day off to rest.

The simple 36 km in took till about 1 pm , so strong was the southerly winds that I struggled. Also didn’t get away till after 9 am due to time lost repairing flat tyre number 3 . With the lake right there I had a prefect bath to find the leak. Plants just off the track have menacing thorns making any off-road excursions for lunch stops or camping etc fraught with peril.

The legs felt weak this morning , not sure why , but suspecting that the body just needs a rest after the long tough day before. 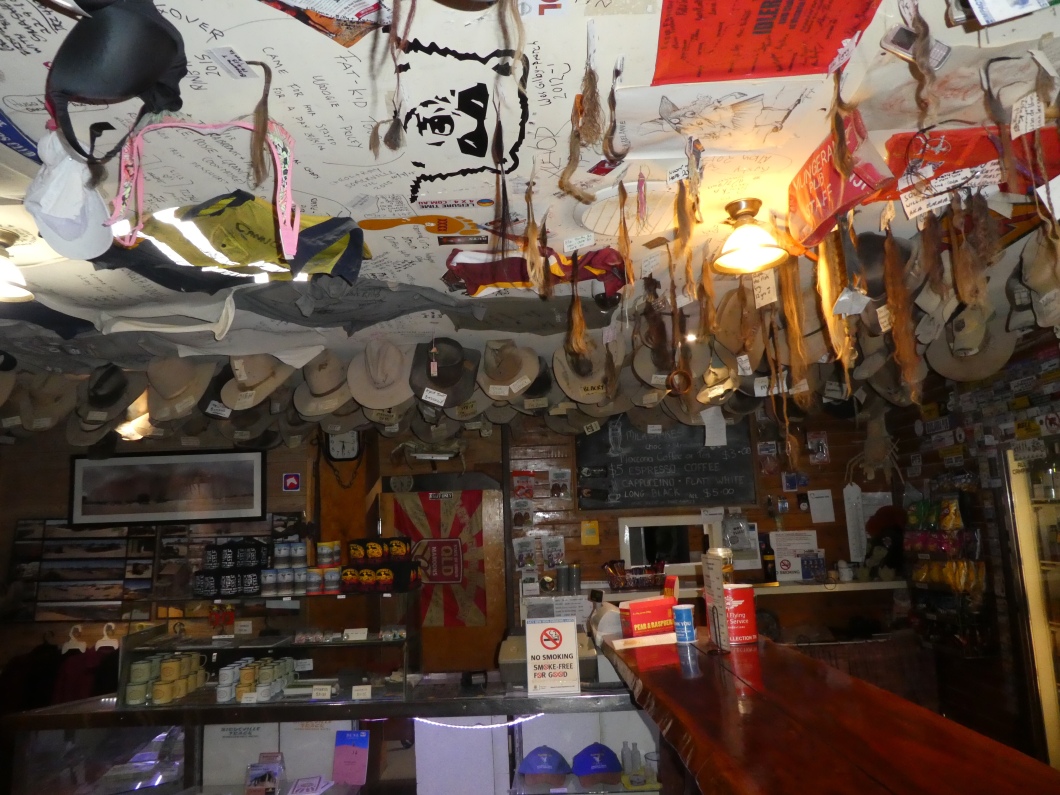 The pub is a rambling complex of sheds , solar system supported by diesel generator and a large area for 4×4 campers. I ordered the speciality of the house “ Burger with the lot “ Didn’t eat the bun , so was still a great Keto lunch. 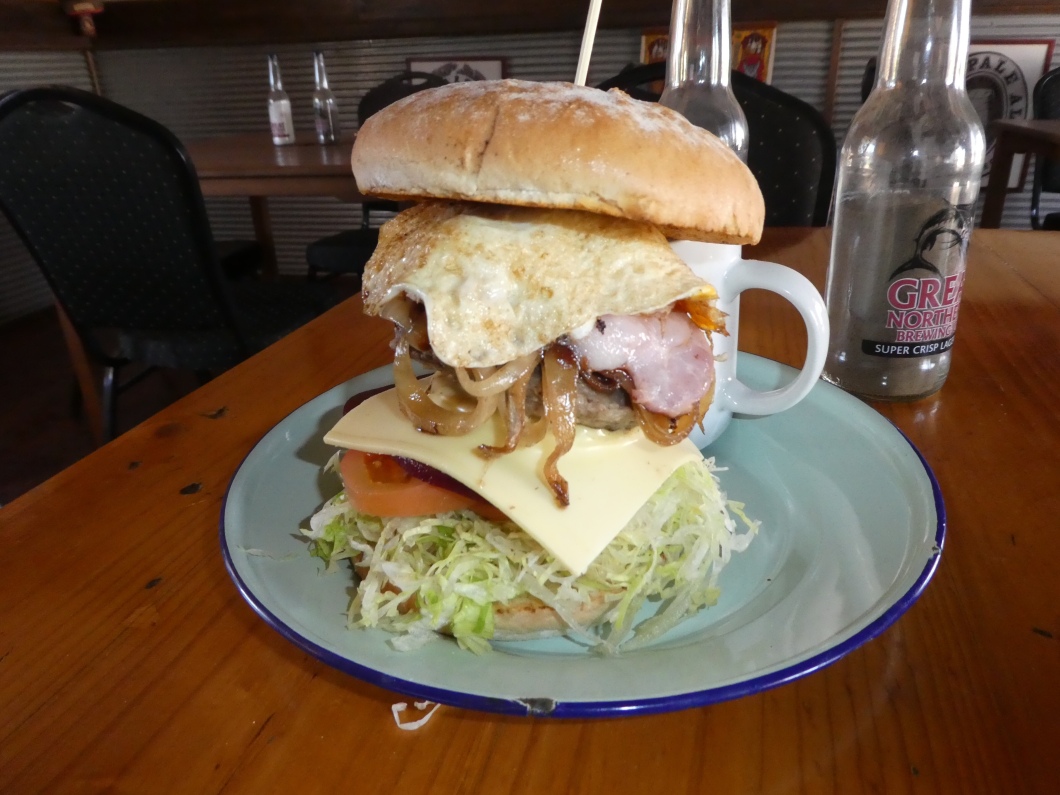 Simply delicious. It is a total high-rise extravaganza, the complete works I can state, building from the shaky base of lettuce, tomato and beetroot, then the wodge of pattie with cheese atop, lashings of fried onions and on the top stack, another full storey, more secure with bacon and an egg with a slice of fried pineapple.

The bar is full of memorabilia from travellers passing through , lots of hats and long locks of hair from wild parties past . Proprietors Phil and Deb are colourful characters, and they are helpful and supportive to the rare cyclists that arrive from time to time to traverse the Track , they see maybe a half dozen cyclists annually . They have a tv in the bar telling the story of Tom Kruse , the man made famous as the mailman from a film in the 1950’s, Back of Beyond. Tom ran a mail service between Marree and Birdsville driving a Leyland Badger truck that delivered mail and goods to various remote cattle stations along the way. The track was also an important route for cattle droving, with large herds driven down to railheads in Marree and Farina . A number of bores along the route were established to water the stock. Back in the 50’s the Track was an incredibly arduous journey with so many challenges compared to now.

Day 5 rest & recovery at the pub. I didn’t lie around though and volunteered to help out as Phil & Deb seemed a bit stretched. Helped clean the ablutions , sorting the mountains of bottles and helping with sorting a huge load of goods arriving from the 2 weekly road train. I was happy to help for free , but when I checked out and paid my bill , Phil deducted $100 so it was somewhat remunerative.

Left early , about 5:30 , trying to get some kms before the dreaded southerly winds again built . With only about 200 kms of the track remaining I had hoped to do half of it. The winds decided otherwise and by the end of the day I made it to Coopers Creek , dry of course , but plenty of trees hinting of deeper water. Found an unofficial campsite with ample available firewood and had the pleasure of a fire to cook and stay warm

Waited till the sun rise before Emerging from my tent , lit the fire again , and enjoyed a good breakfast before packing the hitting the track again. Lots of rough sections where channels cross the floodplanes and loose rocks make for slow progress . I had run out of coffee that morning but this problem was solved for be by this generous couple from WA who stopped to chat , then brewed up a coffee on the spot and gave me enough coffee to see me right for the next day or three.

Was another long slow day , that ended at a nice camp site called Clayton’s Wetlands. It has toilets , hot showers and a large hot tub. Interestingly most of the bore water on the track is very hot .

I set up camp on last light while the big tub was filling and then stripped off for a lovely bath. As chance would have it a couple arrived and set up camp while I was starkers in the bath.

These SA folk were more than kind , feeding me a delicious meal of lamb cooked on his hot plate over the fire. My supplies were almost out and I was very appreciative of there generosity and campfire company. In fact this was the only camping night with company. 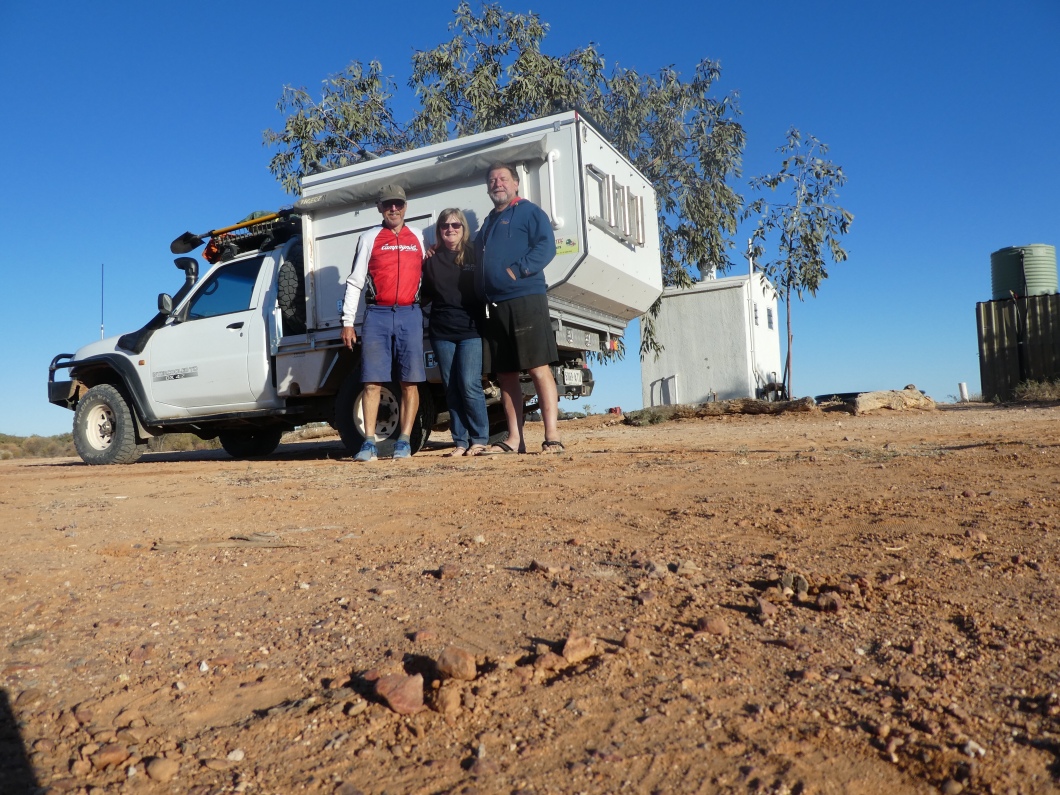 Discovered the rear was flat in the morning , so had another late start , but made the most of it by filling the hot tub again and enjoying another hot bath while also finding the leak and patching. Had a further 2 flats as the day progressed , both thorns in the small trailer wheel. I also needed to remove the thorns embedded on the tyre itself .

The run into Marree was very pleasant due to a wind change , which at times even gave me some assistance. The psychological toll of battering headwinds over the first 7 days had made this crossing very tough , character building ? So the respite was simply wonderful.

As the kms to go ticked off I started fantasising about what food I might buy at the shop , and what feast I might order from the historic pub. After eating surprise peas for breakfast I was intent on making some improvements in my culinary offerings .

Arrived mid arvo and checked into the old pub , had a long long shower and then went grocery shopping. And ah the bitumen .

So why come here – I can say that the major attraction is this fantastic winter climate with everyday perfectly cloudless , dawn till dusk , beautiful star scapes to wonder at is one can stay awake long enough. Amazing open spaces with limitless horizons.

But next time I’m taking Henrietta ( and Barb of course 😉)